Maximizing Your Social Media Presence in a ‘Pay to Play’ World

If you have a business Facebook page, you’ve probably noticed that it’s been getting harder and harder to reach your target audience. And with that, you’ve also noticed a decrease in overall engagement. You’ve tried all of the necessary steps — testing, reevaluating your audience, spending a few dollars here and there on boosted posts, but still nothing, right? Well you’re not alone!

As a business, you want to get your products in front of people, and social media is the means to do so! Did you know that 75% of Facebook and Instagram users use their account daily? Social media is the most effective way to advertise your products, and in order for these platforms to make money off of it, you have to pay to play. They don’t want you to be able to do it for free — at least, not easily. But, paying to play is well worth your time. Not only does a massive portion of the human race use social media, but they use it on a regular basis. How many times did you login to your Facebook or social platform yesterday? Here are a few stats to compare where you stand and gain some perspective:

The latest survey from the Pew Research Center shows that:

Breaking these down one by one, here are the latest numbers as of January 2019:

● The number of American adults on Facebook has not increased or decreased since 2016.
● 74% of Facebook users login to Facebook daily.
● The ratio of male to female Facebook users is roughly even, with men between ages 18 and 34 using the platform slightly more than women in the same age bracket, and both teenage girls and women over 45 slightly more active than men.
● The number of users 65+ on Facebook has more than doubled since 2012, with 41% of older Americans now active on the platform.
● Only half of American teens use Facebook. While this is a big number, if you’re targeting this audience, Instagram, YouTube, and Snapchat are all better bets.
● 88% of Facebook users are logging in via a mobile device.
● 78% of American Facebook users have discovered something to purchase via this platform.
● Facebook is the most popular social network for small businesses, with 86% of small businesses present on the platform.

● 1 billion people are using Instagram on a monthly basis.
● The ratio of male to female Instagram users is roughly even, with slightly more male users in the 18-34 age range and slightly more female users both in the 13-17 and 35-64 ranges. As for the 65+ bracket, statistics show usage being roughly even.
● 59% of Instagram users in the U.S. are under 30, with 72% of teens on Instagram every day.
● Instagram is now the second most popular social network for small businesses, with 48% of small businesses present on the platform.
Snapchat
● Snapchat has 300 million active monthly users.
● 60% of American Snapchat users are under 25.
● 78% of American 18-24-year-olds use the platform.
● 71% of these users visit the platform multiple times per day.
● Looking at all Snapchat users, regardless of age, 49% visit the platform multiple times per day.
● 54% of American 25-29-year-olds are on Snapchat.
● 25% of small businesses are active on Snapchat.

● Twitter has more than 326 million active monthly users.
● The network’s daily active users grew 9% between 2017 and 2018, though reports noted its monthly active users declined in the latter half of 2018.
● 24% of American adults are on Twitter — specifically, that’s 23% of American men and 24% of American women.
● Twitter’s highest demographic of users are those between 18 and 29, with 40% of this population on the platform.
● 27% of 30- to 49-year-olds are on Twitter.
● 19% of 50- to 64-year-olds are on Twitter.
● Only 8% of those 65 or older are on the platform.
● Twitter is the fourth most popular social network for small businesses, with 44% of small businesses present on the platform.

● LinkedIn now has 562 million members.
● 260 million users are active on LinkedIn monthly.
● 50% of college-educated Americans are on LinkedIn. Only 9% of those with only a high school education or less are on the platform.
● 61 million LinkedIn users are senior-level influencers, and 40 million are in “decision-making” positions.
● 57% of LinkedIn use is from mobile devices.
● While only 1% of LinkedIn users post content weekly, 91% of executives use the platform as a source of content.
● 80% of B2B leads come through LinkedIn.
● 31% of small businesses are active on LinkedIn.
So, to sum up those stats, if you advertise on social media, people will see you.

Why do you have to pay to play?

You used to be able to grow your social media pages simply by posting regularly and showing a little creativity. Now, you have to spend advertising dollars to be seen. Organic reach has declined, and now it’s difficult to even reach your target audience or people who like your business page. Because reach is down overall, engagement is down, too. Now that businesses are struggling to reach their audience, there aren’t as many people to engage with. If you feel this is a problem for your page, you’re not alone. In fact, if you aren’t paying to advertise, you’re only able to reach 6% of your Facebook page audience. Super low, right? This is on purpose! So, the answer is: run paid advertisements!
You’ve probably noticed the notifications saying, “This post is performing well, boost it for $5 or $10.” If you own a Facebook page, you know exactly what I’m talking about.

So how do you get the most bang for your buck?

Since every advertisement is going to cost you some Benjamins, you shouldn’t run one unless you’ve first determined what the goal of the advertisement is. Are you trying to drive traffic to your website? Reach the most people in your target audience as possible? Boost sales on your e-commerce website? The goal of your ad should directly impact the image and message that you send. If you don’t have a clear goal for your advertisement, then you shouldn’t run the ad in the first place. If you don’t know how to effectively do this, don’t waste your time and money, because it will be unsuccessful. 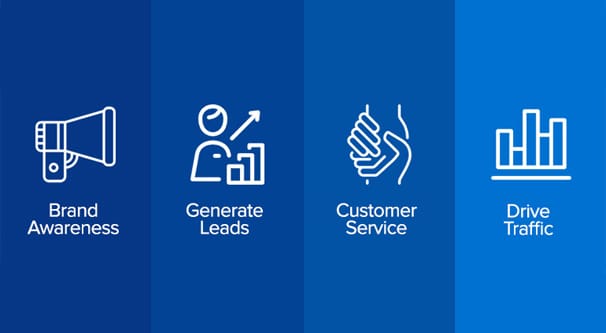 Every platform is different and has a unique audience. The answer shouldn’t always be to put the same message across all of your social pages. You have to cater the message to your specific audience. For example, if you’re advertising for a B2B company, LinkedIn, Twitter and YouTube are the best platforms to do so, while other platforms like Pinterest and Snapchat may not be as effective. Facebook will always be the marketing option that outshines the rest, but it’s important to understand your platforms and who might be on them. 95% of marketers said that Facebook is the best option for the best ROI for their ads. 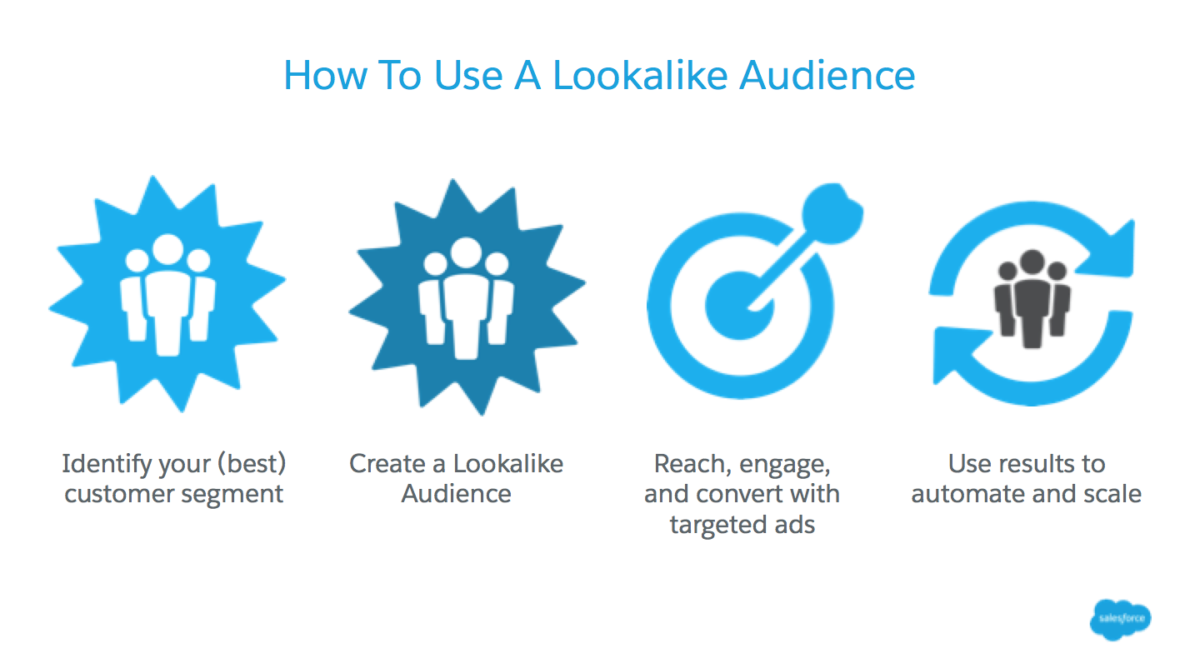 Facebook allows you to target audiences that are similar to your current successful audiences in Ads Manager.

For example, let’s say you have an email list that’s incredibly successful. Your open rate, click-through rate, and engagement rate are outstanding for your industry. Awesome!
With a lookalike audience, you can further leverage that email list. It allows you to:

1. Target your email list or some other fixed audience.
2. Target an audience that is similar to your email list or other fixed audience.
If you have an audience that’s already successful, then targeting those same people or people with similar interests will pull those results and help you potentially reach new people that have never heard of your brand. 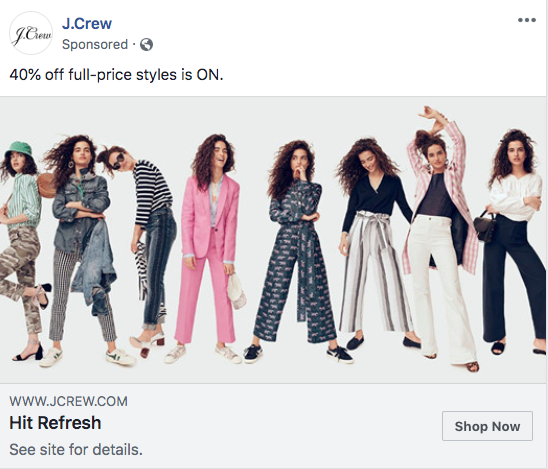 Similar to custom audiences, retargeting audiences allows you to market to consumers who have already visited your website. Identifying these consumers is easy when you use your Facebook pixel. The pixel on your website collects user traffic to serve your ads to people who have visited and taken action (or not taken action) on your website. Retargeting ads are very successful and will see three times more clicks versus a general targeted audience you create on Facebook It makes sense, really — because these users have already visited your website and have shown interest in your product(s), they’re generally going to be more likely to engage with your ads.

To sum up, each social platform is trying to run a business, just like you are! Social media is a great way to find your target audience and find new customers, BUT it’s not free. You can get the best bang for your buck by using the four tactics above in this pay-to-play market.
Need help? No problem. Our team of social advertising experts is ready when you are to help put your ad dollars in front of the right people and help you reach your target audience. Contact us now to get started.

Targeting Your Audience on Social Media